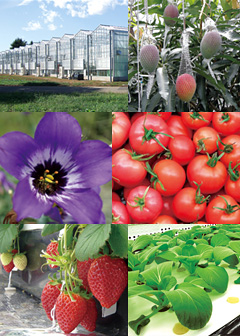 The Horticulture Journal Vol. 85 No. 4

Limonium bellidifolium (2n = 2x = 18), a perennial statice belonging to the family Plumbaginaceae, is cultivated as a garden plant or for cut flowers and is an important breeding material for the production of hybrid cultivars in the genus. In this study, chromosome doubling in L. bellidifolium was attempted to increase the variability in horticultural traits. Seeds of this species were treated with an antimitotic agent, colchicine, at different concentrations and exposure periods. The treated seeds were sown in soil in a cell tray and the seedlings were grown in a greenhouse. More than 50% of the seedlings treated with colchicine for 24 or 48 h, irrespective of the concentration, survived for 4 months after treatment. Most of the seedlings treated for 72 h at any concentration showed very poor growth and abnormal thickening of the hypocotyl, and ultimately died. The surviving seedlings were grown in 9-cm pots. Flow cytometry analysis of leaf tissues showed that 2.5%–5% of plants that received 0.05% colchicine for 72 h, 0.25% colchicine for 24 h, 0.25% colchicine for 48 h, or 0.5% colchicine for 48 h were tetraploid (4x) or mixoploid (2x + 4x). The highest frequencies of tetraploids and mixoploids occurred following treatment with 0.05% colchicine for 72 h. These results showed that colchicine treatment of seeds is effective for chromosome doubling in L. bellidifolium. After 3 years of cultivation, the morphological characteristics of diploid and tetraploid L. bellidifolium plants at the flowering stage were investigated. The stomatal density was lower in all investigated tetraploid and mixoploid plants than in the control diploid plant. The stomatal length was 1.1- to 1.5-fold higher in all tetraploid and mixoploid plants than in the control. Tetraploid plants tended to have wider and thicker leaves than the control and also produced larger flowers.